Could Andy Murray And Jo Konta Both Make Finals On Super Saturday?

So good, in fact, that there must be a strong chance he could feature on Wimbledon’s final Saturday.

The main focus that day is of course the women’s final. But the men’s doubles final takes place too.

Could we even see Johanna Konta and Sir Andy in Wimbledon finals on the same unforgettable Saturday afternoon?

It is the dream scenario. And you certainly  wouldn’t want to rule it out. Not after both Andy and Jo looked so impressive on Thriller Thursday.

After a slightly shaky start, Andy and Pierre-Hugues positively pulverised Marius Copil and Ugo Humbert, who are a good partnership on their own right.

The 4-6, 6-1, 6-0 scoreline told the story of how a fledgling double act suddenly caught fire and began to promise great things.

‘We started to read each other’s game, it came naturally,’ said Andy, trying to contain his own excitement.

Herbert added that by the end they had really begun to play and feel like ‘a team.’

Sure, these are early days. It’ll get tougher as they go on.

But if Andy and Pierre-Hugues keep playing like this, they will go all the way.

The reason is simple. Never mind Murray, Pierre-Hugues Herbert is a genius.

We saw that on Thursday night. Ridiculous that he isn’t better-known here in the UK, because he has won it all.

Yes, Pierre-Hugues Herbert has a Career Grand Slam after completing the set of four with his Australian Open men’s doubles triumph alongside Nicolas Mahut earlier this year.

Add his newfound chemistry with the hungry Andy Murray and you have a fresh recipe for success.

So, Andy Murray to feature on the final Saturday, the day of the women’s final? There really is a strong possibility.

What of Jo Konta’s chances? She was impressive against Katerina Siniakova and managed to brush her rival aside 6-3, 6-4 to show us she is back in great form.

Sloane Stephens is a potentially tricky third-round opponent on the first Saturday.

But Konta just beat the American with one of her best ever performances at the French Open.

If Konta can reproduce that kind of form at Wimbledon, she really will be in business. 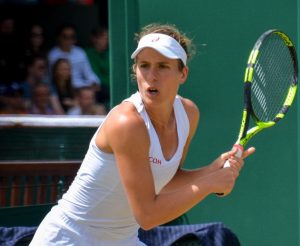 Is Konta good enough to reach a Grand Slam final? Of course she is. Jo really should have reached the final at Roland Garros a few weeks ago.

Let’s face it, Konta didn’t really lose to Marketa Vondrousova in their semi. She beat herself.

But Konta could go all the way this time. If she learns to marry icy composure with the fiery brilliance that gets her into these promising situations, she can do it.

Fire and ice, as Roger Federer puts it.

There are a few hurdles to jump between now and Wimbledon’s second Saturday. Some way to go. Nothing in tennis is certain. That’s what makes it so exciting. But…