How Does The Court Surface Affect Your Tennis Game?

Have you ever wondered how the surface of a tennis court can affect your game?

The answer is quite a lot! Thankfully we have done some research to help you know your surface.

We caught up with the expert team at 10-S Tennis Supply who filled us in with all the technical details.

There are a wide variety of tennis court surfaces available. The primary variables to consider are the firmness, speed and maintenance requirements of the court. 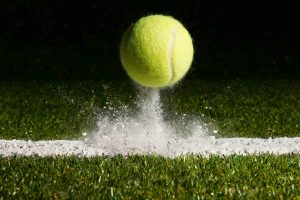 Natural grass courts, like those found at Wimbledon, provide the fastest speed of play. Up until the 1970s, grass was used at three of the four Grand Slam tournaments, with the exception of the French Open.

This suits the great Roger Federer perfectly, particularly as he seeks to close out points as quickly and ruthlessly as possible these days. But if you favour the serve-and-volley style game of Pete Sampras and John McEnroe, grass is your surface.

It is an unpredictable surface, though; the bounce of the ball depends on how recently the grass has been mowed, the health of the grass and how much it’s previously been played on.

Playing on grass is a wonderful experience. However, there are very few natural grass/turf courts. This is largely because grass courts are difficult to build and even harder to maintain.

Owning a natural grass court is similar to owning a golf putting green and all that entails; – mowing, fertilising, weed control, etc.

Clay courts provide a consistently slower ball bounce than other surfaces. This results in longer rallies.

Playing tennis on a Clay court usually involves endurance and patience before a winner can be unleashed, often requiring all of a player’s natural power from the baseline to gain the upper hand.

That’s why Rafael Nadal has been the king of clay for a decade or more. His attrition and power qualities have thrived on this, his favourite surface.

If you see Rafael Nadal and Roger Federer on a deep red-coloured court, you can instantly identify it as the French Open, played every spring at Roland Garros in Paris.

It’s the only Grand Slam tournament played on clay, and the largest clay tournament in the world.

A recent study revealed that one out of every two tennis players is likely to suffer an injury during a six-month period. Unique tennis surfaces that permit sliding, as a Clay tennis court does, result in 85% fewer injuries than the hardest, less forgiving surfaces.

Clay courts are also ready for action in a matter of minutes after a rain shower. While excess moisture runs off, a clay court can still retain enough moisture, and also the ability to breathe, even during the hottest days of summer. That allows the surface to remain an average of 20% cooler than hard courts.

Maintenance is key! Clay courts require daily, weekly, monthly and annual maintenance. They also require the regular use of water to keep the courts moist, playable and structurally sound.

Synthetic membrane/turf courts that are in-filled with rubber or sand provide some of the same attractive playing characteristics as a clay court, with lower maintenance.

These courts where once used in the Masters Championships and the ATP World Championships, though no ATP or WTA tournaments take place on this surface any longer. There are big tournaments in Asia that still use it, however. It’s a fast surface with low-bouncing balls.

Hard Courts with cushioning and an acrylic paint colour system are a popular solution for low maintenance of a hard court with some of the resilience and “give” of a soft court.

Several rubberized cushioning systems have been developed to ease the pain of playing on a hard court.

Used for the Australian and US Opens, these hard courts have allowed the brilliant Novak Djokovic, for example, to develop an effective slide on this surface too.

Perhaps it is no coincidence that Djokovic has now won the Australian Open seven times and can boast three titles at Flushing Meadows too, including the most recent US Open.

Cushioned hard courts can have a medium to fast pace of play depending on how much sand is used in the acrylic coatings. Djokovic can use his precision to find favour here.

The big draw for prospective owners of cushioned hard courts is that they require virtually no maintenance. You simply have to blow or brush leaves and debris off the surface and pressure clean as needed! 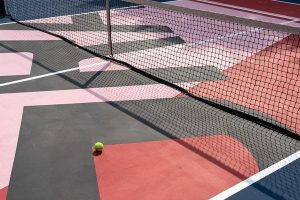 So there you have it, you should be fully up to speed with what court surface will best suite you.

Now you are more knowledgeable and will be able to answer your friends when they ask questions like. “what’s the fastest Grand Slam Court Surface?” You can say with confidence Wimbledon!

From the show courts to the outside courts Wimbledon is a fantastic event that everyone should attend at least once. Are you ready to enjoy the championships this year? Buy Tickets.

The Caring Power of Wimbledon – Force for Good