But that really doesn’t cover the whole story. For these achievements are even more amazing when the severity of Lucy’s disability is taken into account. tennis

Lucy explains: “My disability is considered more profound than the other girls in the top flight of wheelchair tennis. It was even suggested in my very early days of playing the game that I wouldn’t be able to compete amongst the top girls due to this.

“I take great pride in the fact I’ve worked hard to prove them wrong and I hope that I inspire other people with similar disabilities to know that with hard work they can find success.

“I am a T4 Paraplegic as a result of a motorbike accident that I had in 2001. You can see in the MRI scan below where the break in my spinal cord is.

“This is the sam 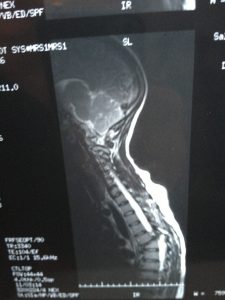 e scan that was shown to me 17 years ago and was the image that finally triggered the realisation that I wouldn’t be walking out of the hospital and that my life really had changed forever. Up until the point that I saw this scan for the first time I still firmly believed that I would regain feeling and movement in my legs. I hadn’t accepted that my injury would be permanent. I will never forget that day and in particular the dark days of realisation that followed.

“As a T4 Paraplegic I have no leg function which means I can not stand or weight bear and I am totally reliant on a wheelchair for mobility. I have poor trunk control and no abdominal muscle function which ultimately means that I have no balance.

“Whilst sitting in my wheelchair with my trunk supported provides me with balance in this position, if I need to reach to do anything I will use one hand to hold on to either my chair or something else while I reach to do things with my other hand.

“You also learn to move your head forwards and backwards to hold your balance in a sitting position, for me I can do this just long enough to get my hair up most of the time before flopping forwards. When I initially had my accident I really struggled and ended up cutting my hair short just to be able to cope.

“As a T4 Paraplegic my injury affects my trunk, abdominal muscles and legs. My arm and hand function is normal which in Wheelchair Tennis terms is the major reason why I am classified into the women’s open division, despite my lack of core muscles meaning I am closer to a Quad player in functionality. 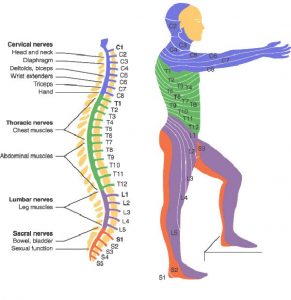 “It has therefore been the Quad players that I have learnt the most from over my tennis career in terms of chair set up and developing means by which I can achieve assisted balance, whilst also learning to move the chair, hold a racket and strike the ball.

“Former GB & World Quad No.1 Pete Norfolk was instrumental in my early days. Pete has even helped me significantly with my current chair set up as his company, EPC Wheelchairs is a major supplier of adapted equipment.

“To achieve the balance required to play wheelchair tennis my chair has a bucket seat and a number of straps around my abdomen which hold me firmly into the seated position. I am then able to push and have both hands to move and strike balls, however my ability to lean forward to reach low balls or to make smaller last minute adjustments in positioning is dramatically hindered.

“The importance therefore of being in the right position to strike the ball is even more important for me than for other players who have the ability to lean and stretch and can make small movements to the chair with their hips.

“This is what makes the grass courts of Wimbledon so incredibly tough, as without the roll you benefit from on hard courts, every movement of the chair at Wimbledon must be generated through a push.

“In addition for me pushing is solely generated through the arms and shoulders. I therefore stay more upright in the push as I don’t have the core muscles to lift my trunk back up without using my arms. You will see many of the other players pushing and generating power through their trunk as well.

Comparative to Other Top-Ranked Players

Diede De Groot (NED) Disability: legs not equally long. Can use a prosthetic to walk as well as a wheelchair for mobility. Full core function.

Aniek Van Koot (NED) Disability: single leg amputee above knee. Can use a prosthetic to walk as well as a wheelchair. Full core function.

“I have beaten everyone in singles with the exception of Yui, but I have beaten her in a doubles scenario. I think the last time was last year at the Birmingham Classic in Toronto when I partnered with Sabine Ellerbrock.”

It’s worth reflecting once more on that record of success. Despite having no core function, she has been on the winning side against every other top player in the world – women who have full core function.

So why haven’t the tennis authorities set up a category in which everyone is disabled like Lucy? Where she would surely wipe the floor with all rivals?

Lucy explains: “With regard to another category being added, there have been some conversations regarding adding a Para division, for which I would potentially qualify but I don’t believe that anything further will be actioned until after Tokyo 2020.

“The other thing to consider with adding classification categories is their progression within the sport. It is currently only the top 7 players plus a wild card from the men’s and women’s divisions who compete at competitions at all four of the major Grand Slams.

“The quad division currently only has competitions for the top 3 in the world plus a wild card at the Australian Open and US Open, although they are taking part in an exhibition at Wimbledon next month.

“There is also no guarantee of an additional medal category at the Paralympics and therefore whether I would personally choose to play in any additional para division would be a difficult decision if the same opportunities were not available to me.

“Some are of the opinion that additional categories would grow the sport, as many players who are more disabled like me are put off competing as they simply don’t believe they can compete with those more physically able.”

Shuker wasn’t put off. Yet it is truly astonishing that Lucy has been able to compete with more physically able wheelchair tennis players. Not only has she competed, she has thrived and succeeded.

Her courage and determination is a true inspiration to the sporting world, at least among those who know her story. We at WDH are so proud to sponsor her. We never tire of saying it. She deserves a higher profile.

But that’s the problem. Not enough people do know her story. Not enough people know that we in Britain can surely boast the best and bravest wheelchair tennis player in the world, when the severity of her disability is taken into consideration.

Indeed it might just be that, all things considered, she is the most inspirational sports woman in the world, bar none.

Maybe it is time that the wider sporting world began to recognise Lucy Shuker and what she continues to achieve.

As the national focus turns to tennis and Wimbledon once more, there is no better time to spread the word.