Sir Andy Murray has received his knighthood from Prince Charles at Buckingham Palace.

As his honour was announced ‘for services to tennis and to charity,’ Sir Andy stepped forward, bowed his head and knelt down on one knee.

He embraced the solemnity of the occasion as the Prince of Wales placed the sword first on his right shoulder, then on his left.

But Sir Andy broke into a broad smile when he rose to his feet and Prince Charles put the medal around his neck. 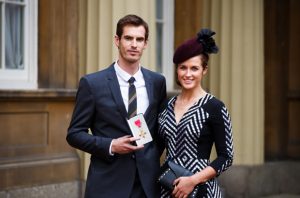 The pair then chatted warmly for a few more precious moments, before the investiture was concluded.

Sir Andy declared himself to be ‘very proud’ to have received the honour.

He added, ‘It’s a nice day to spend with my family – my wife and parents are here.’

Andy and Kim had decided not to bring their children, 3-year-old Sophia Olivia and 18-month-old Edie, because they are so young.

‘I’ll show them the medal when I get home,’ beamed Sir Andy, who is also a UNICEF UK ambassador.

Andy’s celebrity mother, Judy, was clearly proud of her son as she smiled for the cameras.

His father, William also played a significant part in Andy’s tennis development, and that of brother Jamie.

And William couldn’t have looked happier as he took in the big day during the family photo session.

It had been coming for some time, because Murray was named in the 2016 Queen’s New Year’s Honours.

The award came after Andy had won his second Wimbledon and a second Olympic gold for Great Britain.

The passing years had clearly taken nothing away from the pride and the thrill of receiving the honour.

Sir Andy was in good company. The ceremony also featured the novelist Sir Philip Pullman, who received his honour for services to literature.

And Chris Packham received his CBE for services to nature conservation.

Will we see Sir Andy at Wimbledon?

In some role or other, we surely will.

Whether or not he can play is a decision he hasn’t yet made.

But events at Buckingham Palace underlined the great affection and esteem in which Sir Andy is held – for what he has already done for his country and his sport.

If you would like to attend Wimbledon this year and haven’t got a ticket, why not head over to our ticket page for the latest prices.