Tennis in a greenhouse: all change at the French Open

Wimbledon offers tennis in an English garden and now the French Open: Roland-Garros has a tennis court set in a greenhouse.

The brand new Simonne-Mathieu court is the undisputed star of a series of refurbishments at this year’s Roland-Garros.  The season’s second Grand Slam tournament, held in the leafy surroundings of the 16th arrondissement in western Paris.

The first ever match on the Simonne-Mathieu Court was played by former French Open and Wimbledon champion Garbine Muguruza of Spain and Taylor Towsend.

The third-largest court at the French Open, with a capacity of 5,000 seats; the semi-sunken arena is surrounded by four greenhouses showcasing a collection of rare plants from South America, Southeast Asia and Australia. 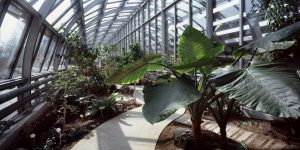 Set in the south-eastern part of the tournament site in the Serres d’Auteuil botanical gardens next to Roland-Garros. It is the only court of its kind in the world, and it is simply stunning.

From the outside, the Simonne-Mathieu court looks like a big glass greenhouse, rising up from the gardens. Quiet and peaceful, it feels like a world away from the hustle and bustle of the areas around the main stadium.

Other improvements at Roland-Garros this year include a complete overhaul of the main Philippe-Chatrier court, with new, creamy-coloured stands that offer its 15,000 spectators more comfort and visibility.

Wimbledon will have two retractable roofs over its main show-courts from this summer following the recent unveiling of the new No. 1 Court.

The French Open remains the only one of the four tennis majors without a roof over its main stadium.

That is set to change next year, when a retractable roof will be installed over a new metallic frame, weighing half the size of the Eiffel Tower; that now sits atop the Philippe-Chatrier court.

On the western side of the site, the Fonds des Princes area has been upgraded to six courts; including four competition courts with tiered seating and two practice courts.

The smallest of the major tennis tournaments in terms of surface area. The French Open extension has been a long time coming; with tournament organisers stuck in a decade-long bureaucratic stalemate over plans to extend its cramped site into the nearby botanical gardens.

At times, weather has wreaked havoc with the playing schedule in Paris. In 2012, rain delays pushed the men’s final between Rafael Nadal of Spain and Serbia’s Novak Djokovic into the third Monday.

A year after rain severely disrupted the 2016 French Open, Paris won the bid to host the 2024 Olympics.

With the 91-year-old Roland-Garros site scheduled to host the Olympic tennis event. The French Open extension was back on course after years of delays.

The project is set to be completed next year with the construction of a new media centre inside the main stadium court.

So, it’s all change at Roland-Garros this year.

But one thing remains reassuringly the same. Nadal is the big favourite once more to win the French Open title once more.

By Danielle Rossingh at Roland-Garros