Real Tennis, what exactly is it?

Tennis as we know it today took off in the 1870s but it comes from the game known as “Real Tennis”, invented by French monks in the 12th century.

At one point, the game was the national sport in France and there were thousands of courts around the country. The sport was so popular commoners were banned from playing! Because no-one was doing any work!

Today there are just 40 active courts around the world, most of which are in the UK.

Henry VIII was passionate about the game. It’s said that he was playing at Hampton Court while Anne Boleyn was being beheaded.

In fact our word “service” derives from the time Henry VIII played. He was so huge that he couldn’t bend down to pick up the ball. He got a servant to do so and to roll the ball along the roof to start the point. 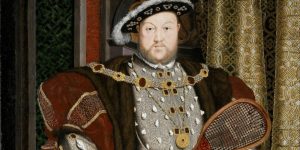 “Tenez” as in “take this” was called out by the server as he hit the ball which is where we get the word “tennis“.

How does Real Tennis differ from the modern game?

Well, it feels like a cross between tennis, squash and chess – it’s both mentally and physically exhausting and the rules are complex.

Like tennis, you play across a net and you can play both singles and doubles. You score 15, 30, 40, game, and most matches are the best of three sets.

However, the court is larger and the balls are solid, rather like a cricket ball but covered in felt. The racket head is smaller than modern rackets and made of wood.

You serve along a roof and there are dozens of different serves, all with different names e.g. the bobble, underarm twist, drag, french railroad, boomerang etc.

Each serve is used for different reasons with different spins to confuse the opposition. The idea is to pin the opponent in a corner or to force them to hit to a particular area of the court.

The game is far harder than it looks but it becomes addictive because you want to conquer it, especially if you’re a half decent tennis or squash player.

If you’d like to see the game or even have a go, https://www.tennisandrackets.com lists courts with their contact numbers. 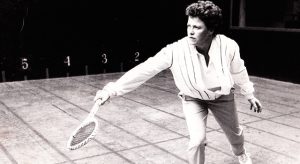